Menu
429 Too Many Requests 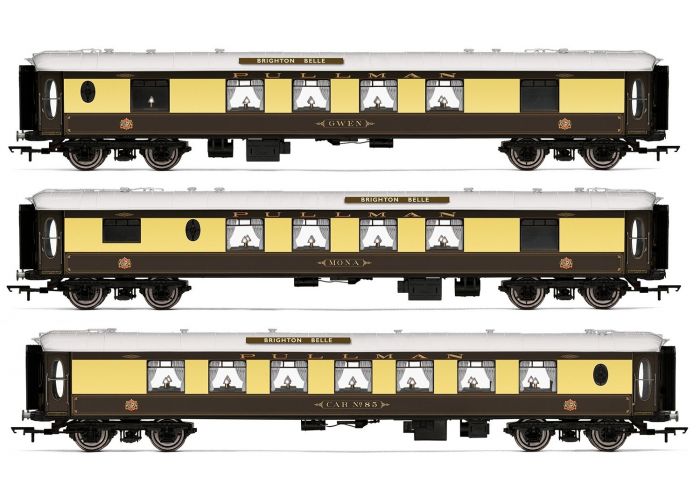 Skip to the beginning of the images gallery
Description

History
The lineage of the ‘Brighton Belle’ can be traced back to the introduction of the daily ‘Pullman Limited Express’ by the London, Brighton & South Coast Railway on the London Victoria to Brighton route on December 5, 1881 and its subsequent replacement by the 'Southern Belle' on November 1, 1908.

The ‘Southern Belle’ was steam hauled until December 31, 1932, the line being electrified the following day as a result of a £2 million direct investment by the Southern Railway to extend electrification from London to Brighton, Hove and Worthing. The Southern Railway recognised that the future of the ‘Southern Belle’ would need to take account of these changes, as well as reflecting the social changes of the 1930s, with stock needing to be light, fresh and creatively styled inside, whilst still retaining the traditional appeal of the Pullman Umber and Cream livery.

Designated initially as 5-PUL, the new electric Pullman cars were built in three sets of five cars by Metropolitan Cammell in Birmingham, each set consisting of a Driving Motor Brake Parlour Third (DMBPT) at either end, with two Trailer Parlour First with Kitchen (TPFK) cars and a Trailer Parlour Third (TPT) in between.

The DMBPT vehicles had a guard’s and luggage compartment with forty-eight third class seats, whilst the two TPFK cars each had a kitchen and pantry, along with twenty seats, the TPT car having fifty-six seats. Measuring 335’ overall and weighing 249 tons, all five cars were of all-steel construction, using cork as an insulator in the floors and two thicknesses of an insulating wood material in the walls and ceiling.

The inaugural trip of the new service took place on January 1, 1933, headed by Unit 2051 and became an immediate success, despite the season. On June 29, 1934, to coincide with the opening of the ‘Swimming Stadium’ in Brighton, the Southern Railway renamed the service to the ‘Brighton Belle’, the 5-BEL designation coming into effect sometime after 1935.

Post-war, it became apparent that the heavy carriages were causing track damage, so in 1955 the bogie sets on all 5-BEL and 6-PUL units were replaced. Eventually though, faced with competition on all fronts, the loss of the luxury reputation, as well as the gradual deterioration of the units, the last ever ‘Brighton Belle’ departed for Victoria on April 30, 1972.

The Pullman Cars have working table lamps that illuminate when the train is in motion.
Length over buffers: 275mm (each carriage).
DCCconcepts ZEN Mini Black decoder installed


Note that R3606 and R4871 are not interchangeable with earlier versions of the Brighton Belle. To facilitate easy assembly of the 5 car rake, all cars are now fitted with standard NEM pockets, and a choice of two Coupling types are included to suite the coupling gap required. Power for the lighting PCB’s is now collected via pick-ups located on one Bogie of each car.

More Information
Reviews
Write Your Own Review
Product Questions
Customer Questions
No Questions
Did you find what you were looking for?
Products you may like