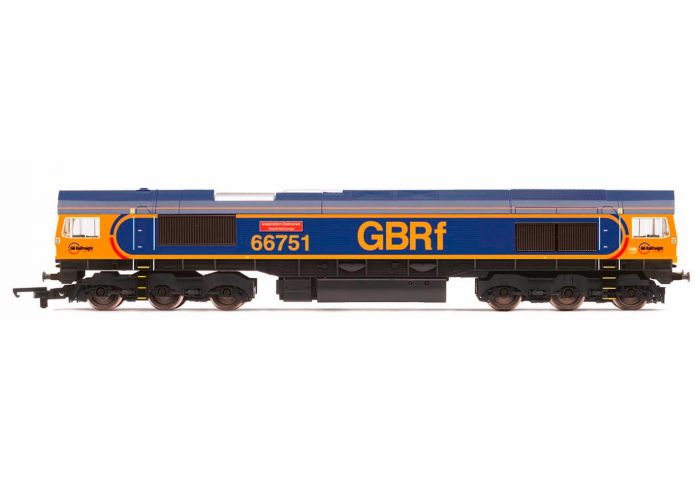 Skip to the beginning of the images gallery
Description
GBRf, Class 66, Co-Co diesel electric locomotive, 66751 'Inspiration Delivered - Hitachi Rail Europe' - Hornby History
The Class 66 owes its existence to EWS as, following the privatisation of British Railway’s rail freight operations in 1996, the company bought up a number of the newly privatised companies, giving them a 93% share of UK rail freight and a fleet of over 1,600 ageing locomotives. These needed to be replaced with reliable diesel locomotives and EWS were aware that Electro-Motive Diesel, part of the General Motors Group in Chicago, had already supplied fifteen Class 59 locomotives to three operators in the United Kingdom.

The result was the Class 61 locomotive, later re-classified as Class 66 under TOPS, a development of the Class 59 and an order for 250 new locomotives was placed, involving an outlay of £375 million, the biggest investment ever in one order, for locomotives. The first locomotive shipped to the United Kingdom, arriving at Immingham, in June 1998 and was followed at the rate of eleven per month via Newport Docks, until the order was completed in December 2001. All that EWS’s engineers had to do was to remove the locomotives’ tarpaulins, unblock the suspension and hook up the batteries to make the engines serviceable, especially as they shipped with fuel and water loaded.

The model
The locomotive is equipped with an 8 pin DCC socket on the printed circuit board, which is ready to accept 8 pin DCC decoders.